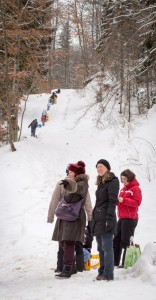 Romanian Hummingbirds in the snow

An update from Mircea Samoila, a great Romanian Hummingbird:

“I have become a hummingbird. I also seem to have inadvertently found myself a whole flock of other hummingbirds. Let me explain: as you know, you asked me to use the money that I had pledged to the Hummingbird Collective to do something in Romania instead of sending it to you. Which led me to discover that spending money for other people doesn’t seem to be as easy as it sounds. The issue did cause a couple of thought storms, with option after option being reviewed and discarded, and with no resolution in sight.

Eventually, a friend randomly invited me to participate in a community project where various people with different skills or hobbies were giving workshops for those who were interested. I was to teach a class of Argentinian Tango. Leaving aside the fact that I had not danced in two years, and was thus quite doubtful of my remaining skills, I did it anyway. I loved it and to my surprise, the participants loved it as well; they asked if the classes can be done weekly. And from here, everything effortlessly became a waterfall, as opposed to a tiny hummingbird carrying a drop of water in its beak: I met all those interested in the course, spoke to my supervisor in Projects Abroad UK about using the recreation / workshop room in the Romanian IT office free of charge, and set it off. We agreed that there would be no fee for the course, but that each participant would donate 50 RON/month (the equivalent of 10 GBP) towards a charitable activity that we would decide on together. My mom provided the first: take the 13 to 17 year old children from a Centre for Juvenile Delinquents near Brasov on a trip to a Buffalo reserve and waterfall 50 kilometers away. The monthly donation of 50 GBP for November and December paid for the bus; we had around 650 RON (125 GBP) more from the course fees for half of December. With these we decided to make sandwiches and lemonade for 40 or so people going on the trip and 35 or so Christmas packages for the children. Shopping for all those taught us that money spent for others goes a long way; money spent for ourselves never seems to be enough: we still had 200 RON left after buying enough ingredients for 80 substantial sandwiches, plus the 35 or so Christmas packages.

The trip was amazing and we are now fast friends with the kids from the centre; we visited them again on Sunday, 20th January: we taught them tango and aikido, we played games and we took photos together. And we promised to go see them every month or so.   The second action, the one for January, was to take 9 children from an orphanage near Brasov sledging in a ski resort about 60 km away. Although not without adventures (one of the kids cuts his chin falling off the sledge, I broke my mom’s car’s mirror and the minibus we rented for the kids blew one of its tires), the trip was again successful. It’s funny how when doing things for others, you somehow cease to pay attention to your own ‘misfortunes’, or at least you seem somewhat incapable of seeing them as dramatically ‘misfortunate’ as you would normally.

In any case, I thought I would keep you informed and let you know we all love these activities. Please feel free to put this email and the photos attached on the hummingbird website. Your project, my friend, is growing, and is now well-established in Romania.!